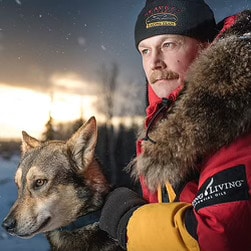 Something that usual people don’t typically follow is the sled-dog world. It is a tight knit group of people who dedicate their lives to caring, training, and racing these unbelievable athletes. Sled-dogs are the only animal in the world that can travel these massive distances at their speed, but it takes the help of a dedicated musher to get them there.  Here’s a story of 3 generations of men in the same family who took on this challenge repeatedly!

The Iditarod is a historical race held in Alaska that takes anywhere from 8 to 14 days to complete, traveling almost one thousand miles across the state. In the past, people took twenty days to complete the race, and as each year gains competitive spirit, the time it takes to finish gets less and less.

Mitch Seavey has not only won this race numerous times, but also set the fastest record twice, and eventually won the title of being the oldest musher to ever win at age 57. He competed in his first Iditarod in 1982 at the age of 22 and then turned his attention to raising his sons Danny, Tyrell, Dallas, and Conway. In 1995, Mitch returned to the Iditarod and competed every year through 2020. When he won in 2017, he broke his son, Dallas’, record from the year prior, at a shocking 8 days, 3 hours, and 40 minutes. That was the same year he got the title of oldest and fastest musher to ever win the race.

“Fifty-seven used to be old, and it’s not anymore.” Mitch said during a post-race news conference after winning in 2017.

Some could say that racing dogs runs in the Seavey family blood. Mitch Seavey’s father, Dan Seavey, took part in creating the first Iditarod race and passed his love for dog mushing on to three more generations of Seaveys. Dan’s most recent appearance in the race was in 2012, when he finished the race at the age of 74. Clearly, this family proves that age really is just a number and dog mushing is clearly their passion.

HERE is a link to the Seavey’s Ididaride page, with brief descriptions of all family members.