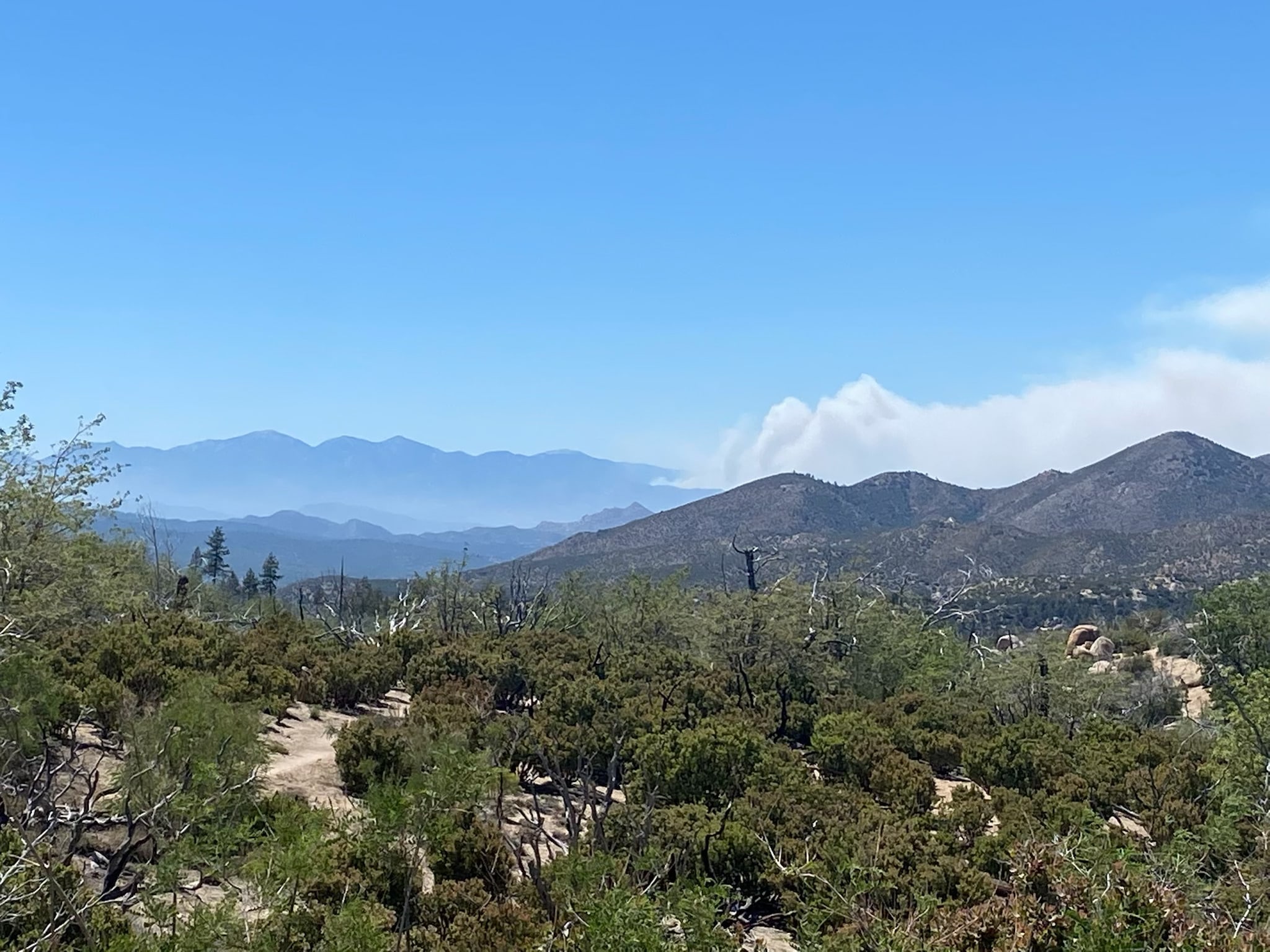 Seniors and others may be following my PCT trail blog on AgingTopic because they remember tough hikes of their own in the past, or have a desire to take on the challenge by planning one, or perhaps they just enjoy a great story!

With my calves screaming and our feet whimpering, we finally descend out of the San Jacinto mountain range. At a temperature of 105, the warm gusts of wind were our only solace for over twenty miles. Although we began at our typical time of 3AM, the minute the sky filled with color around 5, the temperature skyrocketed and seemed like it didn’t stop. While Ryan loves to blast through ascents, I’ve always favored descents, until that day. The rock seemed to be cooking us from all sides, and the switchbacks were relentlessly long. Once we reached the bottom, we were really considering taking our first zero day (a full calendar day with no miles walked on trail).

Before checking into a hotel, we took an Uber to In-N-Out and ate like pigs. Arriving at the hotel, we fell asleep immediately and didn’t wake until the next day. With our morning coffee and some stretching, we always feel we can get going on the trail, but as soon as we opened the door, we were greeted with an angry hot breath of air. We decided to try and get going later that evening, when it cools off.. and go run errands in the meantime. When it came time, we realized the place we wanted to camp (only 7 miles up the trail) was able to be driven to, so we took an Uber there, set up camp and sealed the deal on our first zero day.

Walking in the dark (with our headlamps) feels nice with the kiss of cool air and looks interesting with the monochromatic colors all around us. As the daylight began to fill the sky, we had just tackled a tall hill and started hearing this odd noise. A small cry, from a den nearby… we stood and listened to this coyote pup impatiently awaiting his mom to return from hunting that night. As we walked on, it broke my heart to think the pup’s mom might not be returning, and it took a lot of hope that she would return, to keep me from taking this pup. Luckily, we had daylight before stumbling upon the next section of trail where we found a cairn maze. Hiking through Mission Creek would’ve been impossible to navigate without the sun. Rocks on top of each other absolutely everywhere, but we needed to find the human-stacked rocks and follow them into and out of overgrown territory. Going on for miles, it was an exciting change of pace for the PCT. To make it even better, we were actually following water for once!

Hiking out of the creek bed, it seemed the trail turned vertical. Struggling, Ryan kept offering me advice to which I responded by stubbornly refusing and telling myself my positive attitude would get me up the mountain and nothing else. Keeping that philosophy, the next several days were extremely difficult for me every time we had to climb up a mountain. Only recently did I finally listen to him and slow down my pace, which obviously helped a great deal. In reflection of this struggle, and the heights we’ve had to climb since the last update, Ryan came up with the title to this article “Up, Up, and Away”.

We climbed into Big Bear – a stunning little town if you haven’t been there or heard of it – and wound up staying in the best hostel I’ve ever been to. Due to a lack of transportation, we couldn’t get back on the trail the next day as we had planned. In hindsight, if we had left when we wanted to, we might’ve had to backtrack away from the fire that erupted the day we ended up leaving. Unaware it was happening, we saw it from afar and figured it was further off than it actually was. With a lucky spot that gave us the smallest bit of reception, we received texts from other hikers and a trail angel, telling us the fire was in Wrightwood – the exact town we were hiking to.

Most hikers skipped the whole section and jumped straight into the desert. We continued hiking 30 more miles and got off on a road. We had to reroute a package that was being delivered to Wrightwood, and had a couple days to figure out our plan. Starting so late in the season, we were guaranteed to hit horrible storms in Oregon and Washington by the time we arrived there. This trip ultimately being Ryan’s big dream, I have wanted to do whatever will make him happy. He never held much interest in desert hiking, and at that moment dozens of hikers were getting seriously ill from the water in the desert that lay ahead of us, along with being airlifted out due to high heat and dehydration. Together we decided to skip a large portion of the desert and go to Walker Pass (about 50 miles from the base of the Sierras).

Now in Kennedy Meadows, we are waiting on another package, and about to begin into the Sierras tonight. Colder and steeper, and Ryan’s favorite place, we’re planning on taking our time.

This picture is the Wrightwood fire 75 miles ahead of us. 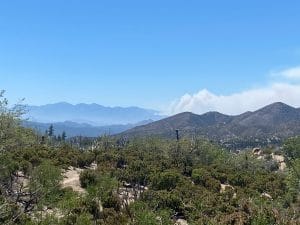